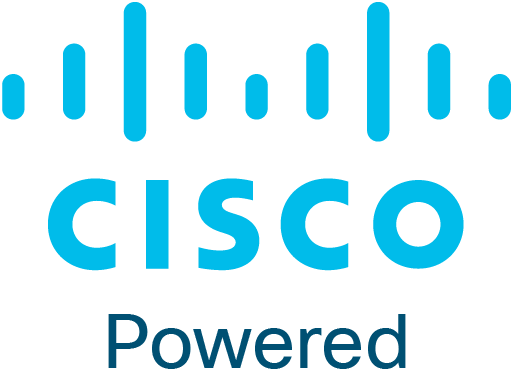 CROC, jointly with Cisco Systems, offers Cisco Powered IaaS, a new cloud service, offering computational capacity, RAM, storage space, and access to network services on demand from a virtual environment constructed by CROC in the territory of the Russian Federation in compliance with Cisco recommendations and best practices. Services are available over the Internet and dedicated communication links and are billed according to consumption-based model («pay-per-use»).

Cloud environment is built on a fault-tolerant VCE Vblock hardware platform. The solution includes equipment and technologies by global leaders, such as Cisco, EMC, and VMware.

This service is aimed at large and medium businesses that:

Customers may be interested in the following Cisco Powered IaaS use scenarios:

- Unified Communications as a Service (UCaaS)

- Telepresence as a Service (TPaaS)

- Disaster Recovery as a Service (DRaaS)

- Desktop as a Service (DaaS)

Our certificates and authorizations

Technical support is included in the service cost and provided by CROC specialists around-the-clock in the Russian language. If necessary, technical support can be provided in English (to be agreed separately).

Service level and response time shall be agreed with a customer and documented in Service Level Agreement (SLA). To view our template SLA, please visit our website.

The service shall be paid on monthly or quarterly basis according to pay-per-use model (postpayment). Monthly service rates shall be specified in a master agreement.

The rates shall include fixed tariffs for the following service elements:

1) VMs depending on the plan, which includes a certain number of virtual processors, allocated RAM, and VM OS license in use. These parameters are checked every hour and depend on VM status (switched on/off).

Backup of running VMs and 30-day backup storage are included in the service cost and provided at no extra charge.

Cisco Cloud Managed SD-WAN:
The Cisco Powered Cloud Managed SD-WAN service is a suite of managed SD-WAN solutions delivered and managed from the CROC cloud by using Cisco cloud orchestration. The end customers are consuming a set of SD-WAN services such as hybrid WAN, performance routing, load balancing, application visibility and control from a CROC. Cloud managed SD-WAN services enable a CROC to deliver SD-WAN at a high scale, with extreme efficiency, and in an automated fashion by utilizing Cisco cloud service orchestration. The end customers will gain additional self-service capabilities for configuring, monitoring, and reporting via a cloud based service portal.

The end customers are consuming a set of SD-WAN services:

Cisco Powered Cloud Managed SD-WAN services must use a Cisco CPE such as:

- When additional virtualized network functions (VNFs) are used to deliver value-added services such as Wide Area Application Services (WAAS) or security, these VNFs can be deployed on Cisco NFV infrastructure (NFVI) or Cisco virtualized CPE

Service portal based on vManage

CROC provides maintenance, administration, and support for the following functionality:

One of Business Communications advantages is that employees can log in anywhere using corporate phones.

Fault tolerance assurance for the following modules and subsystems

The service includes installation and configuration of the following information security system components:

Cisco devices with firewall modules (each processing multi-protocol traffic at 10 Gbps) are used as firewalls. To ensure redundancy and fault tolerance of server applications, duplication of device and module chassis is used. All Cisco firewall inter- and intra-chassis modules are combined in a cluster. Cluster interfaces are connected to Customer's network core switches using EtherChannel technology. To enable interaction between cluster members, an isolated VLAN is used that is declared both on firewall modules and network core devices.

Traffic passing through a cluster of ASA device

Once any of cluster modules fails, all subsequent packets are forwarded to the remaining modules that balace the load among them. 10 Gbps interfaces are used for data traffic transmission and are connected to network core switches using EtherChannel technology and LACP protocol according to manufacturer's recommendations.

Firewall clustering provides high redundancy and aggregated throughput. One module processes traffic at 10 Gbps in multi-protocol mode, while cluster of firewall modules ensures overall speed of up to 28 Gbps.

Firewall protects customer's internal network against unauthorized access and various attacks. Traffic inspection is set up at application layer (Application Inspection) for the purposes of analysis. All traffic that passes through firewall is analyzed using an adaptive security algorithm.

Customer can use non-unique addresses and hide their internal address space behind one or multiple public addresses to prevent intruders from accessing these devices if they know a private address. In addition, NAT allows private IP network (local unicast) to access Internet by translating addresses to IP header.

This service is used when the customer needs to protect its Internet servers. Network is usually divided to segments with different protection levels: the highest level for internal zone and the lowest one for the Internet. Standard protection policy only allows outbound connections (not inbound connections). Both inbound and outbound interface users must have access to servers within DMZ, which usually has medium protection level (lower than inside interface but higher than outside). DMZ may not start a session to the internal network.

Stateful Firewall Inspection monitors traffic and connection status and allows legitimate traffic pass from the Internet to corporate network. This is ensured by monitoring connected outbound sessions and creating a table with values. In addition to traffic and connection status, it monitors OSI layer from which the packet came. For example, TCP client sends a SYN to server, and server replies with a SYN-ACK if the session is established.

This Managed Security option allows network administrators to create per-user security policies, which only provide network access upon successful authentication. If user authentication fails or particular user policies do not allow for specific traffic, access to the requested resource is denied.

When firewalls are implemented without routing disruption, they remain transparent for network traffic and do not require changing settings of other network equipment. To do so, firewalls support a special mode that only requires the use of different incoming and outgoing traffic interfaces.

If external services use encryption (VPN or HTTPS), then a firewall will be unable to view traffic content, so a special approach is used: first, traffic is decrypted (VPN or SSL decryption) and then checked for compliance with security policies. If necessary, traffic can be then encrypted again and sent to its destination.

Firewall monitors status and number of sessions, thus ensuring protection against device memory overflow and CPU overload (in both firewall and end devices).

Packet inspection allows firewall to detect and block (when required) IM and point-to-point traffic. Packets are also checked whether their headers match their content for known packet formats (HTTP, SMTP, etc.). If, for example, non-HTTP traffic is found within a TCP/80 packet (or if HTTP header is incorrect), then such traffic shall be rejected to prevent it from affecting a server.

Firewalls can monitor ICMP traffic. In particular, external ICMP responses will only be allowed if a request was sent from inside. If this is the case, then only echo-reply, time-exceeded, destination unreachable, and timestamp reply packets will be expected.

Thanks to packet inspection, firewall can detect Java code within HTTP traffic. Since Java code execution may be harmful, HTTP traffic with Java code can be discarded to prevent it from adversely impacting a server or end user.

Firewalls provide rule-based access to resources and security, while IPS analyses traffic behavior, namely: viruses, worms, botnets, spyware, spam distribution, etc. Since any malware has specific behavior, which can be described using some pattern, IPS detects traffic matching such pattern previously defined in the system (such pattern are referred to as signatures).

Signatures have so called 'engines' that describe substantially different malware behavior patterns. The choice of a particular engine when describing a signature defines traffic monitoring method: by single packet content, character sequence in a packet set, number of end user devices exchanging traffic, attack vector, etc. Upon detection of signature matching, a message is generated with details of threat type and rating.

Signature base is continuously updated from Cisco.com (subject to subscription). You may also write your own signature to describe traffic using one of engines. You can enable/disable detection of certain signatures and change response to such detection (notify, reset, reset TPC, change content, etc.).

Behavior patterns of certain malware are based on repeatability of actions: either a system can be attacked 100 times during a certain period, or a group of 100 endpoints can be attacked. In both cases, IPS will detect 100 events with a specific signature. Such behavior complicates problem analysis and increases the number of entries in a log. To avoid entry multiplication, Summarizer and Meta Event Generator are used. Summarizer generates only one event and specifies the quantity of similar detections, while Meta Event Generator aggregates multiple events into a single event. For example, if signatures A, B, C and D are detected (and if we know that they describe behavior of the same virus using different technologies), then only one event (E=A+B+C+D), which describes group behavior of these signatures, will be created.

Since IPS is an autonomous module of Cisco ASA and its failure can cause traffic interruption, a special mechanism is developed: main Cisco ASA monitors IPS status and in case of its failure switches over to a backup Cisco ASA with operational IPS, thus avoiding data loss in the event of IPS failure.

DRaaS (Disaster Recovery as a Service)

To ensure uninterrupted operation of a customer's IT infrastructure, CROC deploys custom-tailored solutions such as Disaster Recovery-as-a-Service (DRaaS). The solution is based on multiple cloud sites which are interconnected by optical links and also connected to М9 and М10 trunks.


Cloud platform arms (parts) are located in two of the centers.